Today we welcome South African author Joan De La Haye, one of the contributors to this year's anthology. So, Joan, tell us a little about yourself?

JDLH: I'm one of the very few South African authors living in Pretoria. Most SA authors seem to live in Johannesburg or Cape Town, heaven only knows why. My focus as a writer is predominantly on horror, but I have been known to also write some very twisted thrillers. I also spent most of my childhood living in Germany and Austria, beautiful countries. My writing tends to be rather dark and my sick and twisted sense of humour has a habit of making it's way into my stories.

JDLH: I wrote it quite a long time before I heard about the Bloody Parchment anthology. The story sat on my laptop waiting for me to figure out what to do with it. It was rather patient with me, I have to say. I wrote it just after I got divorced, which is probably why it's so dark. Anyway ... the story is about a couple who go to an amusement park in Johannesburg. They go on a scary new ride that no one will talk about and scary things happen.

JDLH: I wrote it shortly after I'd had a conversation with a woman who'd had an affair with a married man. What got to me, was the woman's absolute stupidity in thinking that the guy was going to leave his wife for her and that they would live happily ever after. I got home and Death Express was born.

JDLH: I love that there are no hard and fast rules in horror. I can let my dark side out to play and that is rather liberating and lots of fun.

JDLH: Stupidity! And the thought of being burnt alive.

I can be found on my blog: http://joandelahaye.wordpress.com/
And Twitter: http://twitter.com/JoanDeLaHaye

This year's competition submission deadline is October 31. Find out more about the submission guidelines and this year's anthology here.
Posted by nerinedorman at 1:19 PM No comments: 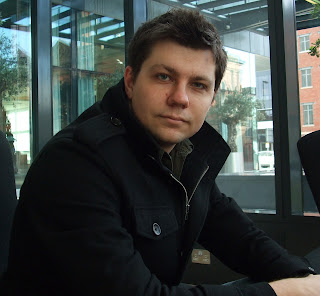 Today we welcome one of this year's anthology contributors, Lee Mather.

Tell us a little about yourself.

LM: I'm a 34-year-old writer and business graduate from Manchester, England. I have works published in horror, urban fantasy and science fiction. My fiction tends to have a dark heart.

LM: Masks is my contribution to the anthology. The story features a celebrated actor who is terminally ill. He receives a series of cryptic notes that hint at a terrible choice coming his way, a choice that might lead to a cure. I wanted to write something that touched upon our various faces, and how better to portray this through an actor.

LM: I wrote this story on my honeymoon of all places! I'm not much of a sunbather, and rather than read by the pool, I decided to write. It's pretty weird to see the outcome, which is a horrid little tale, and think that it started life in the Malaysian sunshine. I had a pen in one hand and an ice-cold Mojito in the other…

LM: To be honest, I like any story that makes me feel, irrespective of genre. Horror doesn't have to be something that is shlocky or full of cheap thrills, but it should leave you with that raw, punched in the solar plexus feeling. Horror is best done when, as a reader, you have a reason to care about the outcome of the story. Pain and fear and grief are very real, very potent aspects of our lives. With a horror story, you hopefully get to experience these emotions from a safer place.

LM: Pain, physical or mental, inflicted in my loved ones, and me helpless to protect them. Oh, and spiders. I hate the little bastards.

Anything you might want to know about me can be found at www.leemather.org.uk

Read up more about the current issue of Bloody Parchment and the submission guidelines here.

Posted by nerinedorman at 12:46 PM No comments: 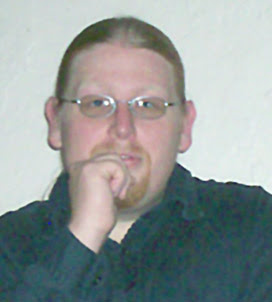 The Mother City of Cape Town has had horror quietly going about its business in the shadow of the Hoerikwaggo in the shape of Toby Bennett, one of last year's Bloody Parchment short story competition finalists.

A born-and-bred Capetonian, Toby says: "I was born in Cape Town back in 1976 and loved stories from an early age. I’m not sure if my relationship with horror was always a good one since I can remember some pretty strong nightmares as a child. My first memories actually involve a couple of scenes from the original The Amityville Horror, I was too young to really understand what I was seeing at the time (my parents had taken me into the drive in as an under two) but that didn’t stop the bloody hand prints sticking, if you will forgive the pun. It took a viewing of The Omen 2 and an increase in vocabulary before my parents actually realised that I was sure there was a coven owls waiting to pluck out my eyes while they slept.

"So that was the start anyway, since then I have written six novels and various short stories. I’m not keen to be tied down to one particular genre but I’m a definite fan of the supernatural and unusual. I hope that comes across in my work, I certainly consider my job done if I can take people out of their own world, even just a little, and give them a glimpse of something new."

The background of Toby's story treads some familiar ground for those who love the genre. He says: "I think the inspiration or at least context for the story should be familiar to anyone who has a passing acquaintance with HP Lovecraft. I’ve always thought that the monsters you don’t, or can’t, see are far more terrifying than the ones you can. A werewolf is just a big dog and these days, god help us, vampires sparkle in the sun; real fear lurks in an empty room where you are completely alone but don’t feel it. You look into the mirror and ask, 'is this me?' or turn suddenly in the hope of catching a glimpse of what might be watching you, worlds away, but somehow tickling the corner of your senses and running tentacles lightly over the back of your neck. The unseen and the unknowable are at the heart of true terror, everything else we have made up to fear, ghosts, goblins or gods, are just ways to give shape to something more profoundly disturbing to us: the emptiness and the unknowable things that might dwell within. A few withered leaves is an attempt to tap into some of that fear and a question I have always asked myself, 'If I could turn round quickly enough what might I see following in the wake of my shadow?'"

As for what Toby loves about horror as a genre, he says: "Like I said human beings have a need to quantify and catalogue the things that go bump in the night. Horror taps into something primal and can be so many different things for different people. The one thing I think we all have in common is that no matter how terrifying something gets we don’t want to look away. Perhaps it’s similar to the way that some people take a morbid interest in serial killers. Once you’ve read a story or understand the ‘rules’ of a monster it seems less frightening, so horror really does offer us a kind of catharsis and ironically even a defence against our deepest fears. That’s the cerebral answer, another way of looking at it is that it can be fun to create a character and then five minutes later come up with a reason why something might want to eat them."

And in answer to the million dollar question most horror authors can give some pretty creative answers--What scares you?--Toby says: "Mice so depraved that they wear red shorts held up by suspenders! Also being asked to provide pictures of myself. Otherwise I’m fine… when I’m awake."

The majority of his written works are available at Amazon, but he's also on Facebook.

Posted by nerinedorman at 2:01 PM No comments: